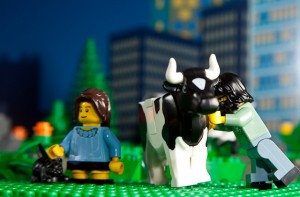 Enterprise tipping is NOT the corporate version of cow tipping, although it is fun to play with the analogy. 😉

“The urban legend of cow tipping relies upon the presumption that cattle are slow-moving, dim-witted, and weak-legged, thus easily pushed over without much force. Some versions of the legend suggest that because cows sleep standing up, it is possible to approach them and push them over without the animals reacting. However, cows only sleep lightly while standing up, and they are easily awoken from this state. Furthermore, numerous sources have questioned the practice’s feasibility, since most cows weigh over half a ton, and easily resist any lesser force.”

We often approach agile adoptions in large enterprises as if it’s possible to “approach them and push them over without the animals reacting.” For example, I often run into an enterprise agile adoption objective of transitioning 90 percent of the enterprise to agile development in 12 months. The reality is more involved; more like a sports or dance team getting great at what they do, as described by Peter Senge1:

“At some time or another, most of us have been a member of a ‘great team.’ It might have been in sports, or the performing arts, or perhaps in our work. Regardless of the setting, we probably remember the trust, the relationships, the acceptance, the synergy—and the results that we achieved. But we often forget that great teams rarely start off as great. Usually, they start as a group of individuals. It takes time to develop the knowledge of working as a whole, just as it takes time to develop knowledge of walking or riding a bicycle. In other words, great teams are learning organizations—groups of people who, over time, enhance their capacity to create what they truly desire to create.”

As an agile transformation consultant, I’ve developed two rules of three to remind myself and my clients about the challenging, yet rewarding work of tipping the enterprise toward a new way of working.

Scrum coaches are well aware of the muscle memory rule of three. It takes at least three iterations for a team to get comfortable with the rhythm of Scrum and its ceremonies, and develop a sustainable practice and velocity that allows it to plan and execute longer range. Think of Scrum as square dancing. It’s not enough to go through the dance moves just once; it takes multiple repetitions for the rhythm and coordination of the dance to sink in—the dancers need to develop muscle memory.

When scaling this iterative, incremental approach to a team of teams in frameworks such as the Scaled Agile Framework® (SAFe®), this same muscle memory rule of three applies. The team of teams needs to experience the rhythm and coordination of SAFe at the program level to get familiar with it. 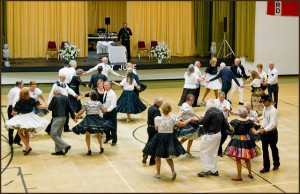 Think of SAFe at the program level as a troupe of square dance teams that needs to dance together with moves between the teams (e.g., passing bandanas or cowboy hats). The planning event is where the dance of the upcoming program increment and the moves between teams are discussed. Like square dancing at the team level, it takes multiple passes at dancing at the team of teams level for the troupe to develop good coordination. In other words, it takes multiple program increments for the team of teams to get good at coordinated development and at handling dependencies between teams.

Before moving on, I want to make a caveat. The muscle memory rule of three is not sufficient for a team or a team of teams to get great at the dance; merely good enough to improve on their own.  I do believe in Malcolm Gladwell’s assertion (from his book “Outliers”) that it takes roughly 10,000 hours of practice to achieve mastery in a field. Finally, mastering agile development involves more than the iterative, incremental process pattern of Scrum and SAFe.

Personal change is hard; changing how we work as an organization is harder. As a transformation consultant, I frequently hear comments like, “We’ve been doing development this way all of my career, what’s wrong with it?” I’ve learned through experience that this reaction is not a request for the rationale behind a new way of developing, it’s a request for empathy.  Organizational change is threatening. No amount of rational argument on my part, as an external consultant, is going to ease that discomfort.

Only when we reach this point has the organization reached the tipping point, that is, the point of no return. In his book “Tipping Point,” Malcom Gladwell describes it as:

“The tipping point is that magic moment when an idea, trend, or social behavior crosses a threshold, tips, and spreads like wildfire.”

When I work with an organization’s Agile Center of Excellence (COE), I describe this tipping point as the moment when the center stops pushing agile development and the organization starts pulling the center’s coaching services. 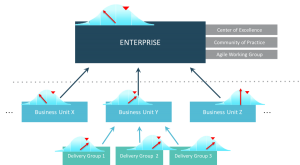 In this figure, the red down arrow represents the tipping point for that organizational unit and reaching that tipping point entails the rule of three with respect to the subunits.

Implications of the Rules of Three

The principal implication is that the urban legend of cow tipping is a bad mental model for enterprise tipping.  We should dispel the myth that this is a simple, quick methodology change.

It’s why John Kotter’s 8-Step Process for leading such a change starts with:

1. Create a sense of urgency

An Agile COE can help focus an enterprise’s agile adoption tipping initiative. I’ll talk more about them in the next blog post in this series. Stay tuned.